I have a MicroVAX 3100 Model 95 that I acquired some years ago. At 32 VUPs it is one of the faster MicroVAXen. 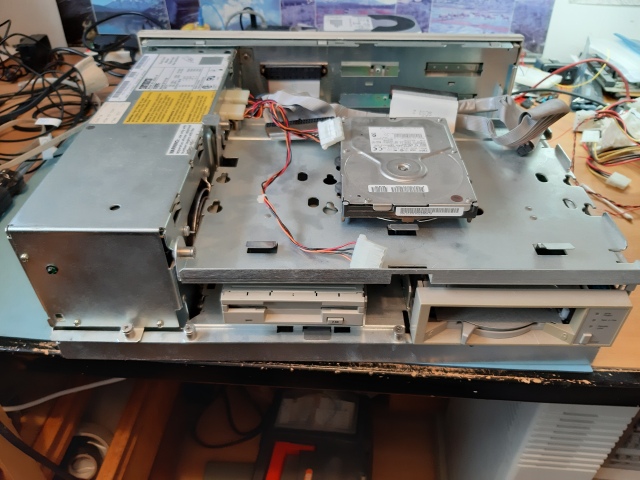 Some time ago I stopped using it because memory modules would suddenly stop working. At the time, I checked the power supply and some of the voltages seemed to be a little out of tolerance, in particular the output marked as 5.1V seemed to be producing 5.3V. I put the machine to one side because at the time I had little knowledge of repairing power supplies.

Recently I decided to take another look at the power supply with a view to getting the machine up and running again, given it is such a comparatively fast machine. I checked the ripple on the outputs but what I saw were spikes. The spikes seemed to reduce in amplitude after a few seconds. It turns out that I was measuring the ripple with poor technique, but I don’t know what the original ripple was now, because I replaced the majority of the electrolytic capacitors before realising my error.

I decided to replace any vaguely suspect electrolytic capacitors, which included the two big smoothing capacitors as one had a high ESR and the other appeared to be bulging slightly. I discovered that one of these would not fully discharge, which I found when I tried to measure its ESR after having had it powered on. Thankfully the meter had some protective diodes, which now need replacing.

After replacing the suspect capacitors I excitedly put it all back together, only to find that it would not power on. It turned out, that following some other sparks I managed to get from the not fully discharged smoothing capacitor I had ended up frying the UC3842N pulse width modulator. Fortunately I had a spare on hand (UC3842AN), replacing it fixed the power supply, and also seemed to resolve the problem of the capacitor not discharging.

Sadly, I also managed to break the connection to the power LED out to the front of the PSU, so now I won’t have that working.

After resolving my measurement mistakes the ripple on the 5V and 12V outputs was about 20mV and the voltages seemed to be right. So I put the machine back together again.

Unfortunately it seems that one of the memory modules is not quite right because the firmware reports an error:

However, VMS seems to think everything is OK.

So I am hoping the machine will now work reliably.