The H7878 PSU in my recently acquired DECstation 5000 Model 240 had a shaky start and then stopped working altogether. I found a problem with the input rectifier smoothing capacitors, at least one of them anyway. It was a real job to remove them because they had been epoxied on. I had to cut the first one, somehow I was able to remove the second intact. The one I cut did not have any liquid electrolyte, although the core was damp with it, I am not sure if that is normal or not.

Cutting Off A Smoothing Capacitor on the H7878 Input Rectifier

Input Rectifier Smoothing Capacitor After Cutting It Off

After I put it back together I first tried turning it on with no load. The fans twitched once. I assumed that as there was no load the PSU was shutting down immediately. So I put it back in the machine, but nothing happened when I powered it on, the fans did not move at all. I later realised this was probably because the PSU cannot handle the load.

I then realised that the PSU was actually producing voltages on its outputs. I put a 10W 15ohm resistor across the main 5V output and got a voltage of about 5-6V. The ripple looked like it might be high though. So I replaced as many of the output stage capacitors as I could easily reach. These were:

C26 was a bit different. It was a small purple capacitor made Sanyo, it was marked simply “10 25”. Since it is on the 12V output I guessed this meant that the “25” referred to the voltage. Below are some pictures of this capacitor: 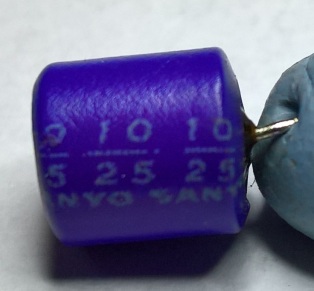 After replacing all these I found that the behaviour was not a lot different, although ripple seemed to be much improved on the +5V output. The 12V fans twitch for a bit and then one of them will start running. The +12V output starts at around 1.5V and then after about 5 seconds or so it rises to +6V, whereupon one of the fans will start running, the +12V output then varies between +5V and +7V, sometimes dropping as low as 4V or rising as high as +8V. This happens when I load the +5V output with a 10W 15ohm resistor, no load for the -12V output, and the fans loading the +12V output.

Basically it seems that the PSU simply cannot cope with much load.