I acquired a VAXmate earlier this year. The VAXmate was the successor to the Rainbow. It is PC compatible and runs MS-DOS. It was the first commercial diskless PC, although mine came with an expansion box containing a Seagate ST225 hard disk. The machine uses an LK250 keyboard, that looks very similar to the LK201.

When I bought the machine I was told that although it had the keyboard, it did not have the cable to connect the keyboard to the machine. The cable uses a 6-way Shielded Data Link (SDL) connector at the machine end, and an RJ12 on the keyboard itself. I hoped to find another keyboard or to make a cable, but I ended up leaving it for a bit.

The first job was of course to inspect it, before powering anything on. The machine is not easy to work on though. The boards are all installed around the outside of the case and interlock so that it is not possible to remove just one board at a time. In the end I found the rear and left hand (as viewed from the rear) boards could be removed as one by pulling the connectors out of the right hand board and pushing it away a bit. The capacitors all looked OK. I also had to remove all traces of the rubber feet on the main unit as they had turned completely to sticky black goo. The pictures below show the innards of the machine. 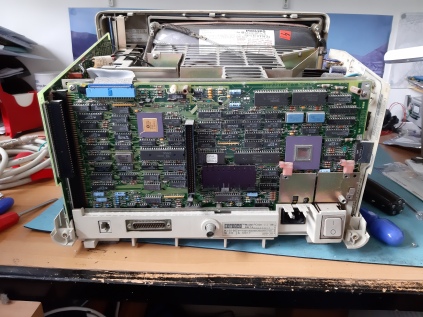 VAXmate with the cover taken off

VAXmate with some boards removed.

VAXmate with some boards removed. Floppy disk drive connections on the left. 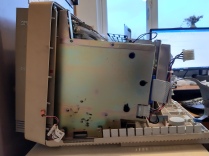 VAXmate floppy disk drive. The rubber bumpers have deteriorated and left a bit of a mess on the board.

VAXmate from the side with boards and floppy disk drive removed. The two wires at the bottom left are for the front power LED 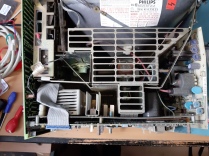 VAXmate from above with the cover off. The two black wires going to a header on the left hand board are for the speaker.

My first attempt to power on the machine went well, it powered up and tried to access the floppy disk. I didn’t have a floppy disk though. The display showed an error (60), which is presumably some kind of keyboard error.

I took the disk out of the expansion unit with the intention of trying to using the David Gesswein MFM emulator to image it. It turned out that the disk is bad and all attempts to read it failed miserably. I opened the disk up to see what is going on and it looks to me like it can’t find track 0.

I then managed to obtain a keyboard cable for an IBM Model M keyboard, as this has the SDL connector on one end. Unfortunately it has a PS/2 connector on the other end and my initial plan was to butcher the cable and put an RJ12 on it. But I decided that I should not do this to a relatively rare cable. So I got a more run-of-the-mill PS/2 cable with a female connector and decided to butcher that instead as an extension plugged into the IBM cable. This failed to work. I thought that this was because it turned out that the IBM cable only had 4 wires out of 6, however I later discovered a different problem and then found that my home-made cable is in fact fine.

In the end an LK250, with the correct cable, came up on eBay, so I bought it. Sadly this keyboard did not work, nor did my original keyboard with the cable. Having checked the cable was OK I smelt a different problem.

Testing the RJ12 end of the cable with the cable plugged in, I realised that the 5V supply to the keyboard was not working. I took the machine apart and traced the 5V supply, eventually reaching a fuse (marked F1 on the board, rated 2A). This fuse was open circuit, so the fuse had blown. At this point it dawned on me that my earlier probing of signals in order to make my own cable may have caused an accidental short and blown the fuse. The position of the fuse is marked on the picture below. It was hard to desolder the fuse because one end must be connected to large 5V plane that sucks all the heat away from the soldering iron.

VAXmate Board With Keyboard Fuse Marked

Having now replaced the fuse, both keyboards work and the machine works fine. I ran Sokoban on it, although I don’t seem to be able to remember how to get it to exit from the game cleanly.