I have finally fixed the H7878 PSU from my DECstation 5000 Model 240. When I last posted about it, the PSU was not working very well, it was unable to sustain any load. Following that post I asked for suggestions on the ClassicCmp mailing list.

The first suggestion was to see if there were any significant dips in the voltage across the input smoothing capacitors. But the voltage was rock solid around the 330V mark on the DM DC range of my Digital Multi-Meter.

The second suggestion was that perhaps something was shorted on the outputs, causing the overcurrent sensing to switch it off. Some suggestions talked of checking low value resistors for shorts, there are two 10ohm resistors, and one looks like it has a bit of physical damage, but they both measured fine. I also checked the capacitors across the 5V output, particularly the ones that I had not by then replaced, they seemed OK. Nevertheless I decided to replace the two big ones across the 5V output just in case, particularly the 3300uF one (can’t see a label to reference it) which measured a bit high on ESR, the 8200uF one also had a relatively high ESR, so it was worth replacing too. Replacing them failed to make a difference.

I then had a closer look at the riser board on the output section, as this is probably doing the regulation. I noticed that C407 (120uF 25V) was measuring high on ESR, and then I realised there were signs of leakage. There were also some marks (heat perhaps?) around C408 (120uF 16V). I decided they should be replaced.

Having removed C407 I realised it had definitely leaked. Reaching C408 was going to be hard, so I removed the whole riser. This would make it much easier to repair and clean, and I could see that there appeared to be some cleaning needed. Once I got the riser out I could see some shiny residues on the underside, I am not sure that they can be capacitor leaks, but they did look a bit like it. 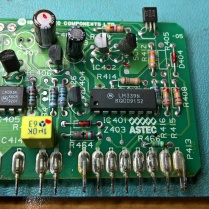 I finished replacing C407 and C408 and cleaned everything up. This is the result:

I re-installed the riser and tested it again. I used the MicroVAX 2000 load board on the 5V output. This time all the fans turned immediately, the 5V output looked good, and there was no significant ripple. The 12.1V output measured 12.4V though, I am not sure if that is OK or not.

I partially reassembled the PSU and installed it in the machine. The machine ran fine, I ran the self tests a few times and left the machine running for around an hour or more and it stayed running. So I finished reassembling the PSU, re-soldering back the LED wires and finally reassembled it again.

I replaced quite a few capacitors in the end: 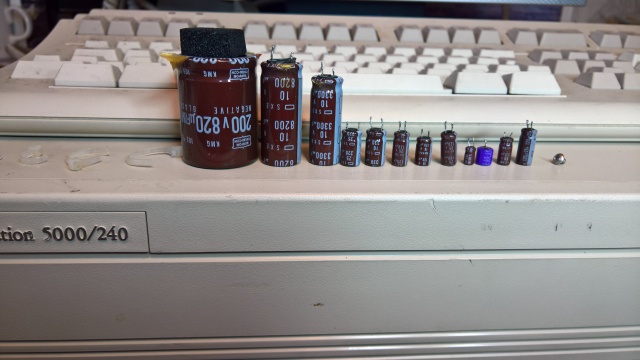 Here it is, working once more: 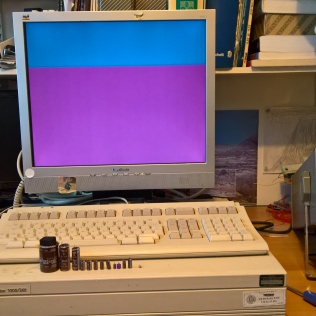 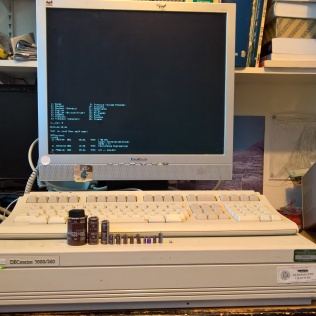 This entry was posted in Retro-Computing and tagged DECstation 5000. Bookmark the permalink.